Ezekiel’s description of the Temple also provides us with two other important clues. First, the door of the Temple was oriented towards the east. This is apparent from Ezekiel 8:16, which reads: “And he [God] brought me [Ezekiel] into the inner court of the house of the LORD; there, at the entrance of the temple of the LORD, between the porch and the altar, were about twenty-five men, with their backs to the temple of the LORD, and their faces toward the east, prostrating themselves to the sun toward the east.” (NRSV)

The objection here seems to be that the priests were praying towards the sun (and perhaps worshipping the sun), rather than facing the Holy of Holies to pray to the LORD. But from the perspective of the location of the Temple this tells us that the “the entrance of the temple of the LORD” faced east, since men facing east had their backs to that entrance. In and of itself, this doesn’t tell us much about the size of the Temple, but it does tell us that the Temple did not have a north-south alignment, which would have made an easier fit on the Silwan Ridge.

More importantly, another passage in Ezekiel describes the Glory of Yahweh (the LORD) leaving the Holy of Holies “from the middle of the city” and going to “mountain east of the city” (Ezek 11:23). This is generally assumed to have reference to the Mount of Olives, which in Zechariah’s day, “lay before Jerusalem on the east” (Zech 14:4), and likewise faced the Temple in Jesus’ day (Mk 13:3). This is also the mountain from which, according to Acts, Jesus ascended to heaven (Acts 1:12), and on which you can still visit the Mosque/Church of Ascension, which is a converted crusader shrine on the site of an ancient Constantinian basilica. Later Rabbinic tradition in the Mishnah likewise remembers that “all the walls [of the Temple] were high, save only the eastern wall, because the [High] Priest that burns the [Red] Heifer and stands on the top of the mount of Olives should be able to look directly into the entrance of the Sanctuary when the blood is sprinkled” (Middot 2.4).

This map shows the geographical relationship of all of these elements. The red oval shows the Temple Mount, the red line giving its due east orientation. The blue oval shows the Silwan ridge, with the blue line given its east orientation (from a presumed northern Silwan site of the Temple). The black oval to the north is Mount Scopus. The white oval in the middle is the Mount of Olives, while the green oval to the south is the “Mount of Offense.” The yellow square is the site of the Mosque/Church of the Ascension, which is roughly the top of the Mount of Olives. Notice that the natural dividing lines between these three mountains are clearly indicated by the gray east-west roads to the north and south of the Mount of Olives, which follow the least steep topography. 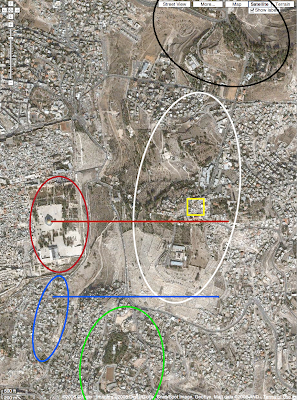 What this map shows is that a Temple Mount location for Solomon’s Temple more clearly matches the both biblical traditions of the Mount of Olives being to the east of the Temple, and the Rabbinic tradition that the High Priest could see the gate of the Temple from the “top of the Mount of Olives.” While it is not impossible that a Silwan temple location could broadly match these criteria, this relationship is much more clear and consistent with a Temple Mount location.

The “Mount of Offense” (KJV “Mount of Corruption,” NRSV “Mount of Destruction,” JPS “Mount of the Destroyer”; 2 Kgs 23:13, cf. 1 Kgs 11:7), marked in green on the map, is linked with ancient idolatry. “The king [Josiah] defiled the high places that were east of Jerusalem, to the south of the Mount of Destruction, which King Solomon of Israel had built for Astarte the abomination of the Sidonians, for Chemosh the abomination of Moab, and for Milcom the abomination of the Ammonites” (2 Kgs 23:13 NRSV). This passage describes the reforms of Josiah, who destroyed the pagan shrines that Solomon had earlier permitted (1 Kgs 11:7; the implication that pagan shrines had existed there for three centuries is also interesting). This is described as being southeast of Jerusalem, which matches the contemporary location of the Mount of Offence; the mount gets its name from its traditional association with these events.

In Hebrew the term “Mount of Destruction” is har ha-mašḥît, (cf. Jer 51:25), which seems to be a play on words with har ha-mašḥah, “the mount of anointing,” with mašḥah “anointing” derived from the same root māšaḥ “to anoint,” from whence māšîaḥ, “one who has been anointed,” the “anointed one,” or the messiah (with Christ as an Anglicized version of the Greek christos, which is simply Greek for “anointed one.”) Hence there is an apparent antitype between the Mount of Destruction/the Destroyer, and the Mount of Anointing/the Anointed One/the Messiah, which may illuminate Christ’s associations with the Mount of Olives in the New Testament.
Posted by Grandpa Enoch at 12:16 PM

This has been a great introduction to Jerusalem geography and particularly as it has a relationship to the temple. Thank you!