All things are better in Koine

OK, so it has nothing, well almost nothing to do with the Temple.

http://www.youtube.com/watch?v=lvVylnHnn9s
Posted by Grandpa Enoch at 10:05 PM No comments:

I watched a movie recently called "Pi" (1998), an early work by Darren Aronofsky, (better known for the recent mystical sci-fi film "The Fountain.") It's not widely available, but can be found on Netflix.

It is about a brilliant mathematician who is trying to find the 216 number sequence that governs the universe. However, he is also slowly going mad (by implication because of his knowledge of the number) It is rather surreal, and it is never quite clear what is really happening, and what represents his delusions.

At any rate, the reason I mention this on a blog about the Temple is that a strange sub-plot of the movie involves the mathematician being cultivated by a sect of Hasidic kabbalistic Jews who want the same number because it contains the gematria of the "shem ha-meforash" the mystical unspeakable name of God. They want to get it to reopen the link between heaven and earth lost when the Holy of Holies and the Temple were destroyed by the Romans.

On 21 May the Temple Mount Faithful again had a procession with their cornerstone in hopes of laying the foundation of the Third Temple. They do this every year, generally with a small crowd and a large contingent of Israeli police.

The link to more details didn't work when I tried it, but they may fix it soon.
Posted by Grandpa Enoch at 10:35 PM No comments: 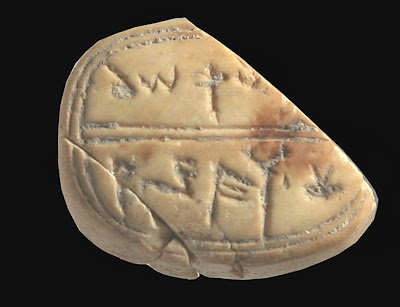 Posted by Grandpa Enoch at 12:44 PM No comments:

This report briefly mentions the forthcoming opening of an archeological site of "a temple modeled after the Temple in Jerusalem and used by Samaritans on Mount Gerizim near Nablus." It is a rather vague statement, but suspect that this is referring to the archaeological site of the Samaritan temple on Mount Gerizim. Does anyone know any details?
Posted by Grandpa Enoch at 2:06 PM No comments:

Reuters Report
Posted by Grandpa Enoch at 5:21 PM No comments:

A book by Jonathan Klawans, Purity, Sacrifice, and the Temple, (Oxford, 2005), has just come out in paperback, (ISBN 0195395840). It's a very interesting examination of the meaning of Jewish sacrifice. Here is the blurb:

Ancient Jewish sacrifice has long been misunderstood. Some find in sacrifice the key to the mysterious and violent origins of human culture. Others see these cultic rituals as merely the fossilized vestiges of primitive superstition. Some believe that ancient Jewish sacrifice was doomed from the start, destined to be replaced by the Christian eucharist. Others think that the temple was fated to be superseded by the synagogue. In Purity, Sacrifice, and the Temple Jonathan Klawans demonstrates that these supersessionist ideologies have prevented scholars from recognizing the Jerusalem temple as a powerful source of meaning and symbolism to the ancient Jews who worshiped there. Klawans exposes and counters such ideologies by reviewing the theoretical literature on sacrifice and taking a fresh look at a broad range of evidence concerning ancient Jewish attitudes toward the temple and its sacrificial cult. The first step toward reaching a more balanced view is to integrate the study of sacrifice with the study of purity-a ritual structure that has commonly been understood as symbolic by scholars and laypeople alike. The second step is to rehabilitate sacrificial metaphors, with the understanding that these metaphors are windows into the ways sacrifice was understood by ancient Jews. By taking these steps-and by removing contemporary religious and cultural biases-Klawans allows us to better understand what sacrifice meant to the early communities who practiced it. Armed with this new understanding, Klawans reevaluates the ideas about the temple articulated in a wide array of ancient sources, including Josephus, Philo, Pseudepigrapha, the Dead Sea Scrolls, New Testament, and Rabbinic literature. Klawans mines these sources with an eye toward illuminating the symbolic meanings of sacrifice for ancient Jews. Along the way, he reconsiders the ostensible rejection of the cult by the biblical prophets, the Qumran sect, and Jesus. While these figures may have seen the temple in their time as tainted or even defiled, Klawans argues, they too-like practically all ancient Jews-believed in the cult, accepted its symbolic significance, and hoped for its ultimate efficacy.

Posted by Grandpa Enoch at 9:12 PM No comments:

Inscriptions and images have been found.

The Language of Jesus?

I have to admit, this is something I never thought I'd see. "Happy Feet" in Aramaic.

Click here.
Posted by Grandpa Enoch at 9:24 PM No comments: