Having established the parameters of the possible location of Solomon’s Temple—that is, within the confines of the urban boundaries of Jerusalem in the tenth century BC, or in other words, the contemporary Temple Mount and Silwan ridge—we can now examine the size of Solomon’s Temple. (Silwan is the name of the modern Arab village/suburb on the ridge south of the Temple Mount, derived from the name of the Siloam pool which is on the southern edge of the ridge.) From one perspective this is fairly straightforward, since, unusually, the size of the Temple is described in some detail.

Solomon’s Temple was measured in cubits (ʾammāh, literally “forearm,” see Anchor Bible Dictionary 6:899-900). Unfortunately, the exact length of a cubit is not known. (Hereafter cubit will be abbreviated as “c”.) Technically, it was the distance of the “forearm” from and the elbow to the tip of the middle finger, a distance that would obviously vary from person to person. It also varied through time. 2 Chronicle 3:3, written after the return from Babylon (2 Chr 36:23), says Solomon’s Temple was built using the “old measure” (middāh ha-rīʾšônāh, literally the “first” or “primordial” measure). Obviously the author of Chronicles recognized that the length of the cubit in his own day was different from that in Solomon’s day; probably the Jews had adopted the Babylonian cubit while in captivity in Babylon. At any rate, scholars generally see the cubit as ranging from 18-21 inches, with the longer “royal cubit” used for religious and monumental building (see Ezek 40:5, 43:13, where he describes such a long cubit of “a cubit and a palm” in length—a cubit consisted of six palms). For purposes of simplicity, I will here use a conversion of 2 cubits to a yard. It should be noted that this is, in fact, a minimalist measurement. The actual size of Solomon’s Temple may have been 15% larger than the converted measurements used here.

The Temple proper is described as 60c long by 20c wide (1 Kg 6:2, 2 Chr 3:3). In addition there were side rooms attached to Temple = 7c on each side, or 14c total. The total width of the Temple was thus 34c. Furthermore, 1 Kgs 6:3 and 2 Chr 3:4 describes the porch (portico, Heb. ʿulām, Greek pronaos, from which the name of this blog derives) as being 20c long. Thus, the grand total for the Temple is 80c by 34c, or, roughly 40 yards long and 17 yards wide. In addition, however, there were two courts surrounding the Temple, the “court (ḥăṣar) of the priests and the great plaza (ʿăzārāh)” (2 Chr 4:9). The court of the priests was also later called the “inner court” (1 Kgs 6:36, 7:12) or “upper court” (Jer 36:10). The “great,” or more literally “big” plaza (ha-ʿăzārāh ha-gĕdôlah) was, by its name, obviously larger than the courtyard of the priests, and probably encompassed it. Based on these names, and parallels with later usage in Herod’s temple, we can assume access to the inner/upper court of the priests was restricted to the priests (and apparently the king) for their sacrificial operations. Non-priests could come and participate in the outer or great plaza. In addition, the “great court had three courses of dressed stone to one layer of cedar beams all around; so had the inner court of the house of the LORD, and the vestibule of the house” (1 Kgs 7:12, NRSV). (The “vestibule” (ʿulām, porch or portico) may have had its own wall, separating the zone of the Levites from the Priests, with the inner veil demarcating Priest from High Priest zones.) This passage is generally assumed to describe an inner wall separating the inner court of the priests from the outer great plaza, and an outer wall separating the great plaza from the profane space outside the temple. The inner wall may have been a 3-4 foot high barrier that would allow people in the great plaza to view the activities of the priests. 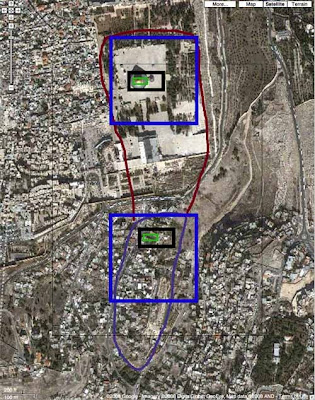 The accompanying Google Map shows the contemporary Temple Mount to the north, with the Silwan ridge to the south. The purple line shows the rough outline of what most scholars think was the Jebusite city of Jerusalem before David’s conquest. The red line shows the generally accepted expansion of the city northward sometime during or after Solomon’s reign. Superimposed on this map are two rival regional locations for Solomon’s Temple, one on the Temple Mount, the other within the walls of old Jebusite Jerusalem. (Where exactly the Temple may have rested within these two respective zones is a different question.) The green line shows the size of the Temple itself, the black the hypothetical minimal size of the courtyard as discussed above, with the blue square showing the size of Ezekiel’s 500x500c plaza described in Ezek 40-48, which will be discussed later. What this shows is that, although it is a very tight fit, Solomon’s Temple could have fit on the Silwan ridge. However, it should be emphasized that the eastern slope of the ridge is very steep. (You can see on the map that the eastern slope has no houses on it.) Even assuming a minimal size for the courtyard, Solomon’s Temple and courtyard will barely fit on the Silwan ridge.

In the next post I will deal with the issue of Solomon’s Palace complex and Ezekiel’s description of the Temple.
Posted by Grandpa Enoch at 12:24 AM

This is fascinating material! Thank you for this. It helps to place everything into context.