In the previous post I noted, “the size of the court and plaza are not given in construction narratives.” On the other hand, we do have a detailed description of the Temple court and plaza in Ezekiel chapters 40-48. Unfortunately, the precise context of these chapters is uncertain. Chapters 40-48 are dated by Ezekiel in “the twenty-fifth year of our exile” (40:1) which is generally equated with 573 BC. This means these chapters were written after the destruction of the Temple in 587/6. Ezekiel also calls these chapters “visions” (40:2). In his vision he is obviously not seeing the contemporary Temple of Solomon, since it had been destroyed. These facts raise some exegetical questions. The basic question thus becomes: “What is Ezekiel describing?” The Temple of Solomon as it was before its destruction? An idealized and glorified version of the historical Solomon’s Temple? An eschatological vision of the future rebuilding of the Temple as it should be after the return from the Babylonian exile, or in the last days? Or a vision of the celestial Temple, as in Revelation? Unfortunately, we don’t know for certain. We do know, however that Ezekiel was a priest (1:2), and an eyewitness of the Temple as it stood in the last years before its destruction. His testimony should be given careful consideration in attempting to locate Solomon’s Temple.

Without going into the details, Ezekiel describes the Temple building itself as almost precisely the same size as Solomon’s Temple in the construction narratives (Ezek 40:48-41:4; 1 Kg 6:2-6, 2 Chr 3:3-4). In addition, however—and unlike the construction narratives—Ezekiel also describes the court of the priests and the outer plaza. The inner court of the priests directly in front of the Temple proper was said to be 100x100c (Ezek 40:19), while the entire inner courtyard, including the Temple itself and open court area to its sides and rear, was about 100x200c. Note that these are roughly the same proportional dimensions for the inner court that we speculatively derived by doubling the size of the Tabernacle and its court, as described in the previous post, to match the fact that Solomon’s Temple was exactly twice the size of the Tabernacle. From this we can conclude that, broadly speaking, Ezekiel’s description of the Temple and court of the priests is consistent with the known historical dimensions of Solomon’s Temple. 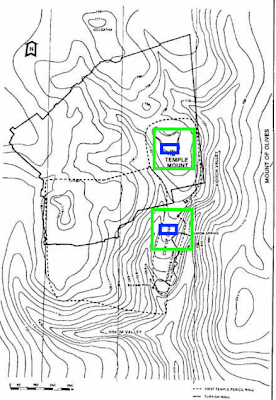 What we can say for certain, however, is that if Ezekiel’s description of a 500x500c plaza is accurate, it is impossible that the structure could have been built on the Silwan ridge. It must have been somewhere to the north, on the Temple Mount. The preceding illustration shows why. The blue rectangle shows the rough size of the Temple and court of the priests according to Ezekiel, while the green square shows the rough size of Ezekiel’s plaza. It becomes clear from the topographical map that, while the Temple and court of the priests would fit on the Silwan ridge, the plaza would not. It would have required the construction of massive retaining walls that would have left clear archaeological evidence and have greatly reduced the current steep slope of the Silwan ridge on the east side.

Whether or not Ezekiel’s Temple of Ezek 40-48 is idealized or eschatological—and is thus larger than the real Solomon’s Temple of his day—the fact remains that Ezekiel, who was a priest and thus an eyewitness of the size of Solomon’s Temple just before its destruction, could conceive of the Temple complex as a whole measuring 500x500c. That is, he believed that such a plaza could fit in the area of the Temple. This fits well with the Temple Mount as the site of Solomon’s Temple, but is impossible for a Silwan location. (For an attempt to situate the 500x500c plaza on the Temple Mount, see L. Ritmeyer, The Quest, (Jerusalem: Carta, 2006).)
Posted by Grandpa Enoch at 7:34 PM

Very interesting! So the Temple Mount does seem like a more logical place for Solomon's Temple given the assumption that Ezekiel's vision accurately describes the plaza as well as the temple. Fascinating.

I found the templemount.org website the other day that describes several different theories, with many maps, diagrams, and descriptions that are interesting.

Does the Western Wall have any connection to Solomon's temple, or was it entirely a construction of the Second Temple?

The Western Wall is part of the retaining wall built by Herod to extend the outer plaza and create room for his basilica. It broadly matches the description of these things by Josephus.