The 13th century cathedral of Amiens is one of the finest in France.

Here are some photos on the north transept rosette window depicting an inverted pentegram in the center of the rosette. 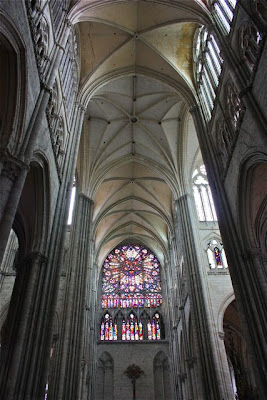 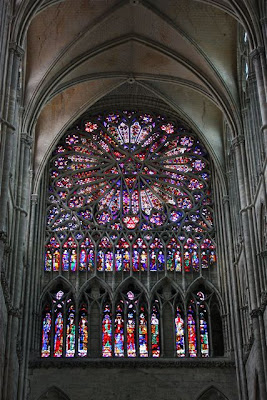 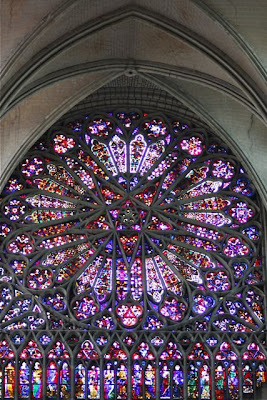 Posted by Grandpa Enoch at 12:17 AM No comments:

Source of the Swine Flu Discovered 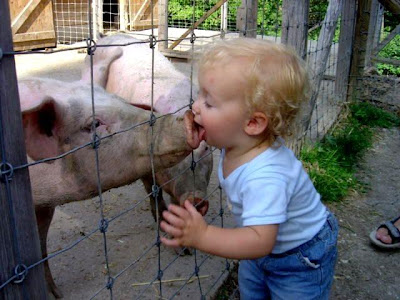 Welcome to our 7000th visitor

The "Temple Study Group" associated with Margaret Barker is having a symposium on "Temple Music: Meaning and Influence" in London on 30 May 2009. For information see here:

Symposium on Temple Music
Posted by Grandpa Enoch at 10:27 PM No comments:

Jewish fringe groups are agitating for annexation of the Temple Mount

here
Posted by Grandpa Enoch at 4:53 PM No comments:

The Temple Foundations of Mysticism

The relationship between Jewish Hekhalot and Merkabah mysticism and the tmeple is well known, and has been studied in some detail. (See, for example, R. Elior, The Three Temples: On the Emergence of Jewish Mysticism, Littman, 2004.) I’ve recently come across some interesting statements that form part of the broader the background for the widespread transformation from temple ritual to mysticism.

The first is a statement by the first century Jewish philosopher and commentator Philo (On Dreams 2.231-3). He begins misinterpreting the Greek of the Day of Atonement narratives in Lev 16:17 by describing when the “high priest” (megas hieros) enters the Holy of Holies:

“‘For when,’ says the scripture, ‘he [the High Priest] goes into the holy of holies, he will not be a man till he has gone out again’ (Lev 16:17). But if at that time he is not a man, it is clear that he is not God either, but a minister (leitourgos = one who performs sacred ritual) of God, belonging as to his mortal nature to creation, but as to his immortal nature to the uncreated God. When [the High Priest’s] intellect (nous) is seized by divine love, when it strives with all its might to arrive at the most inner sanctuary (aduton = Holy of Holies), when the person surges ahead with all his force and with all his zeal, transported by the deity, he forgets everything, and forgets himself; he remembers only the deity, and is suspended from Him. ... But when this inspiration fades, and desire loses its fervor, he becomes a human being once again, He leaves divine things behind [= leaves the Holy of Holies], and then encounters the human things which wait for him in the gateway of the temple (propulaiois).” (adapted from Pierre Hadot, What is Ancient Philosophy, (Harvard, 2002) p. 162--a superb introduction to ancient philosophy--and the Yonge translation.)

This passage represents Philo’s attempt to merge Platonic contemplation (theōria) of the divine with the activities of the High Priest in the Holy of Holies on the Jewish Day of Atonement rituals. Platonic mysticism and Temple ritual are thus seen as symbolically interrelated, and the Holy of Holies is the supreme site of Platonic contemplation of the divine. (Indeed, our world “contemplation” derives from the Latin “con-templum,” literally “with/at the temple,” referring to the temple as a place for divination.)

Interestingly, Plotinus, the most important pagan Neoplatonist, has a very similar allegorical interpretation Platonic contemplation of the Divine, which he likewise links to the temple.

“This is the purport of that rule of our [Neoplatonist] Mysteries: ‘Nothing Divulged to the Uninitiate’: the Supreme [God] is not to be made a common story, the holy things may not be uncovered to the stranger, to any that has not himself attained to see [the vision of the One]. There were not two; beholder was one with beheld; it was not a vision compassed but a unity apprehended. The man formed of this mingling with the Supreme must--if he only remember--carry its image impressed upon him: he is become the Unity, nothing within him or without inducing any diversity; no movement now, no passion, no outlooking desire, once this ascent is achieved; reasoning is in abeyance and all Intellection and even, to dare the word, the very self: caught away, filled with God, he has in perfect stillness attained isolation; ... He belongs no longer to the order of the Beautiful; he has risen beyond beauty; he has overpassed even the choir of the virtues; he is like one who, having penetrated the inner sanctuary [of the temple], [leaves] the temple images [of the gods] behind him--though these [images] become once more the first objects of regard when he leaves the holies [of the temple]; for There [in the temple/contemplation] his converse was not with [an] image [of the god], nor with trace, but with the very Truth in the view of which all the rest is but of secondary concern.” (Plotinus, The Enneads, 6.9.11, MacKenna translation.)

Here Plotinus--whose Neoplatonic ideas indirectly become foundational for later Christian, Jewish and Muslim mysticism--uses a very similar temple allegory to explain his understanding of mystical union with God. Mystical union with God is a transcendent event linked allegorically and ritually with entering the Holy of Holies of the temple.
Posted by Grandpa Enoch at 10:27 PM No comments:

1- Near Tel Tayinat in Turkey, dating from the same period as Solomon's Temple.

http://www.drhawass.com/blog/press-release-news-temple-taposiris-magna
Posted by Grandpa Enoch at 6:45 PM No comments:

Attempts by Israeli groups to pray on the Temple Mount/Haram are causing rising tensions.

See here.
Posted by Grandpa Enoch at 5:37 PM No comments: