Ezek. 1:5 (NRSV)
In the middle of it was something like four living creatures. This was their appearance: they were of human form.

Unfortunately, the Hebrew of Ezekiel is very terse and ambiguous, probably intentionally so. A more literal, though not necessarily more intelligible translation is:

And from the middle of it [were] the likenesses of four living [things] (ḥayyôt) and this was their appearance: the likeness of a human.

Ezekiel begins his description of the throne of God with reference to the “four living creatures,” in Hebrew, ḥayyôt. Ḥayyôt is the (grammatically feminine) plural of hayyāh, meaning something that is living or alive. In Gen 2:7, when God breathes of “breath of life” into Adam, he becomes a “living soul,” a nefeš hayyāh. In the Bible the term ḥayyôt generally refers to any kind of animal, but quite frequently wild animals or beasts of prey (HALOT = Hebrew-Aramaic Lexicon of the Old Testament). (Indeed, the Vulgate translates it as animalium; “animal” is a good semantic translation, since animal refers to something that is “animate” because it has an “anima,” Latin for soul.) It should be noted that Ezekiel 10:1-15 gives a lengthy description of the Cherubim (kĕrubîm), concluding that “these are the ḥayyôt” that he described in chapter 1. I’ll return to the question of the Cherubs later. When he first encounters them Ezekiel only knows them as strange “living beings” rather than Cherubim.

The next question raised by this passage is the location of the four “living things,” which I will call by the Hebrew word, ḥayyôt. The Hebrew says they are mit-tôk-âh, literally, “from the middle/midst of it [the cloud].” This can mean either that the four ḥayyôt came out of the middle of the cloud, or that they four ḥayyôt were inside the middle of the cloud. The same word is used in 1:4 referring to the amber light and fire. Are the light and fire in the middle of the cloud, or coming out of the cloud? Both ancient and modern translators have taken both positions. The LXX describe the ḥayyôt as en tō mesō (in the middle), while the Latin says ex medio (from out of the middle). This is an import distinction: is Ezekiel going into the cloud to see the throne of God? Or is God coming out of the cloud so that Ezekiel can see him? There is no way to know for certain in this case, but based on parallels with other biblical theophanies (Moses enters the cloud in Ex 24:18, vs. Ex 19:9 where the people only see God within the “dense cloud”) I believe that Ezekiel enters into the cloud to see the four creatures. This is, as I will later argue, the equivalent of entering into the Holy of Holies in the Temple.

Ezekiel first describes the four creatures as having the “form, shape, likeness” (dĕmût) of “living” things/beings/animals/creatures (ḥayyôt), and then in the very next line describes them as having the dĕmût of a human (ʾādām). At first glance this seems contradictory, but Ezekiel seems to be saying that these dĕmût have the general form of a human/ʾādām, but their wings, hoofs, and four faces (discussed later) mean they are not real ʾādām.

(It is worth noting that in Gen 1:25 the first human (ʾādām) has the shape/form/likeness (dĕmût) of God (ʾĕlōhîm), whereas here the ḥayyôt have the dĕmût of ʾādām. (The hidden implication of this may well be that these beings are part of the divine council to whom God said “let us make ʾādām in our dĕmût” in Gen 1:25. But that is another question.)

Image 1: Late 13C San Chapelle in Paris depicting Ezekiel in the center facing the four ḥayyôt (right). Above Ezekiel is Christ, the figure Ezekiel sees enthroned. Behind Ezekiel is Solomon's Temple at Jerusalem. 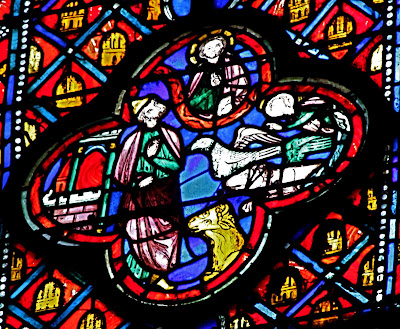 Image 2: 14C Winchester Bible (Winchester, England), showing on the right one of the ḥayyôt, and on the left, the four "wheels" (which I will discuss later). 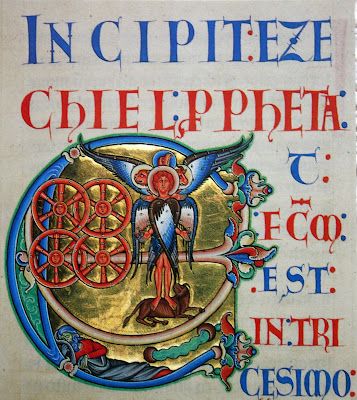 Image 3: 6C Rabbula Gospel showing Christ (above) enthroned on the ḥayyôt with the "wheels within wheels". 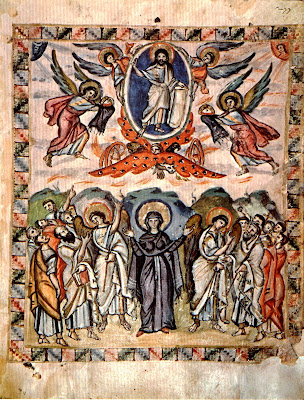 Posted by Grandpa Enoch at 6:37 PM